The second session T20 World Cup was played on 21st June 2009 at Lords, London and with it; emerged the second winner of the cricket championship that took birth in 2007. In the second T20 World Cup, Pakistan became the champions. The runners-up of the last T20 World Championship, Pakistan beat Sri Lanka in the final, held at Lord's (London), by 8 wickets and with 8 balls remaining. It was the duo of Shahid Afridi and Shoaib Malik, which steered the team to victory. Shahid Afridi was later declared as the 'Man of the Match'.

In the final match, Sri Lanka batted first and managed to make a respectable score of 138/6. However, this was not before the team lost majority of its top scorers, including Tilshan, Jayawardene and Jayasuriya, to excellent bowling by Pakistan bowlers, especially Abdul Razzak (who took 3 wickets). However, Kumara Sangakkara was the one who carried the match ahead, almost solely on his shoulders. It was his efforts that led Sri Lanka to reach the decent score that it had. 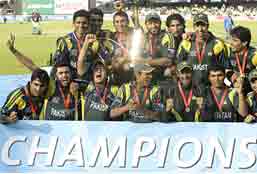 After Sri Lanka's innings came to anend, it was the time for Pakistan to do the chasing. Kamran Akmal came as an opener and made an early exit, but not before scoring a quick fire 37. Soon, it was the time for Shoaib Malik and Shahid Afridi to take the game forward and they did so in an excellent manner. While Afridi scored a 54 from 40 deliveries, Shoaib had 22 runs, off 20 balls. Finally, the two batsmen took their team to victory eight balls before their 20 overs came to an end.

Shami-led Titans seal narrow win to go top [+]
Titans climb to the top of the table after Hardik Pandya becomes first captain to bat first after winning the toss.